When D suggested we leave the desert in the summer to go back home to Ireland I  couldn’t wait.  The weather in Abu Dhabi in June was tolerable,  in July and August its pretty unbearable and you spend little or no time outdoors.  So an escape to the cooler climes of Ireland seemed like the perfect idea.  Visit some family, top up on the essentials (teabags, favourite crisps, items from Penneys!) and then maybe a little travel around Europe or further afield before coming back to the UAE.  When it came to booking flights D decided that we would go for eight weeks, I was thinking more along the lines of three but we booked for eight and off we headed in July.

One of my first priorities was going to one of our favourite restaurants in D’s hometown. My favourite dish is their ‘Garlic Crab Claws’, which I have been craving since we moved to Abu Dhabi, so reservations were made for the first Saturday we were home and our appetites were well and truly whet.  We were seated promptly in the restaurant and menus were left for us to peruse, I always order the same thing here so didn’t really feel the need to look but a year had passed so I wanted to see if anything new had been added to the menu.  To my utter disbelief, something was MISSING from the menu!  I asked the server where the Garlic Crab Claws had gone and she informed me that they were taken off the menu but they had them on the specials board, relief!  However to my annoyance, my favourite dish had now almost doubled in price.  Wow I knew the recession in Ireland was over but seriously!!  As I really wanted them I decided to order a starter portion (which was now priced at the original price of the main size portion) to cure my craving and opted for Grilled Tiger Prawns for my main course instead. 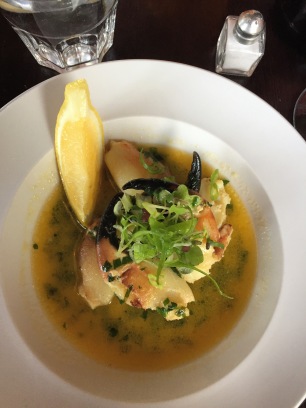 The food was good, no denying it, but I had a sour taste in my mouth regarding the pricing of the crab claws. I understand that things change but to have such a drastic rise in price on a menu item that the restaurant owners know is their best seller is down right obnoxious.  Business is business of course but you can’t DOUBLE the price of something and expect people not to bat an eyelid.  So we decided that this would be our one and only visit to Eastern Seaboard throughout the duration of the summer! 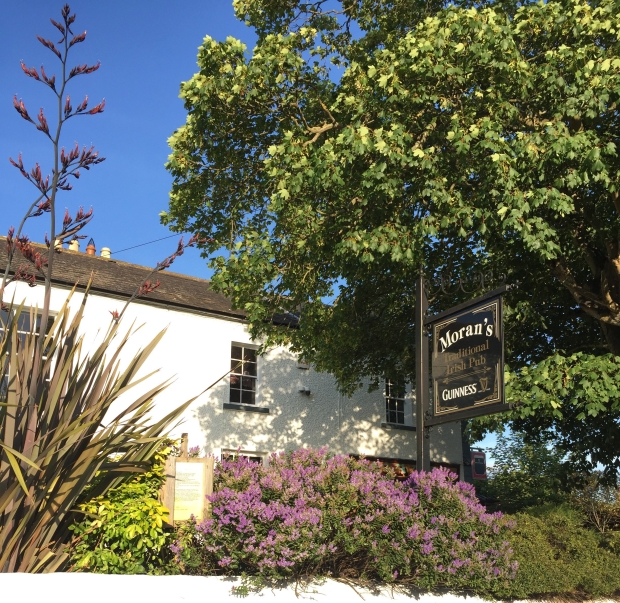 After spending some quality time ‘down south’ with D’s family including 1 year old twins who were newborn the last time we saw them and of course a quick visit to our local with some friends,  it was time to head to my part of the world…Northern Ireland.

The journey north to my home in Portrush is just over 2 hours.  Portrush is located on the north Antrim coast and IMHO is one of the most beautiful parts of Ireland, this would be our base for the next 7 and a half weeks.

After catching up with family and getting settled in to our new base we decided to be tourists in our home.  Northern Ireland has the most amazing coastline and in the past 10 years or so tourism has really taken off. 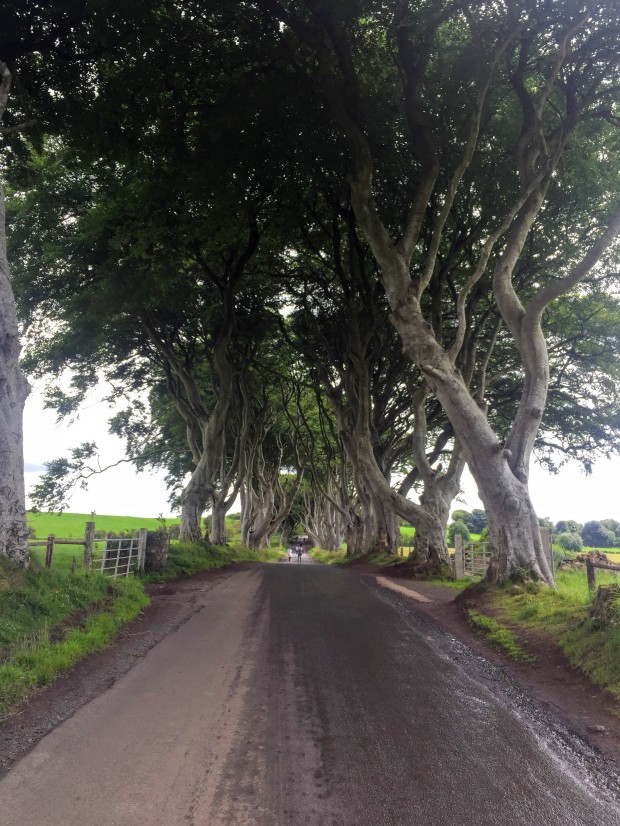 We soon discovered that Game of Thrones is VERY much now a part of Northern Irish culture and everywhere we tried to go there were GOT tour buses and crowds of people dressed up in costumes! 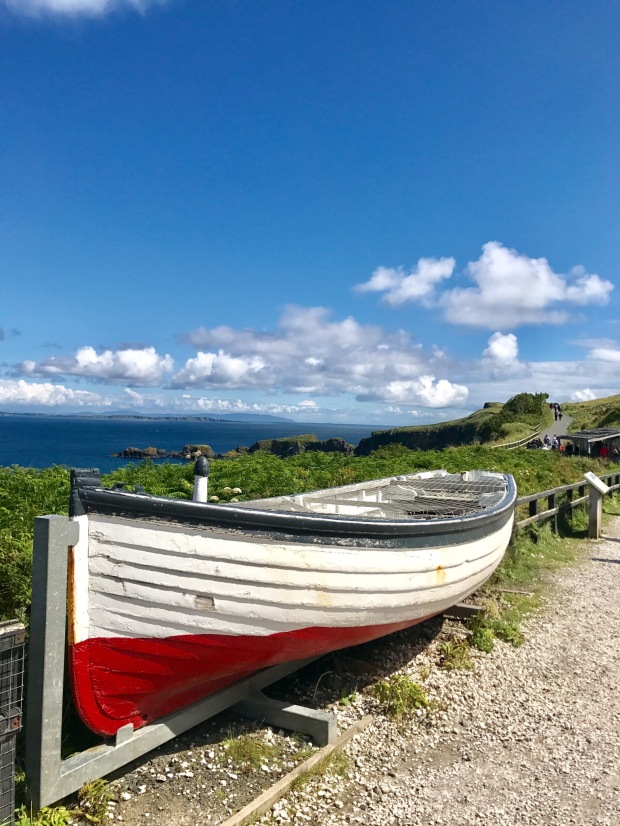 Although I have visited all these locations numerous times throughout the years there’s nothing quite like spending a few years in a different country and culture to give you new appreciation and love for the country of your birth and its phenomenal natural beauty.  My number 1 hatred about life in Ireland is the weather but then when you see how incredibly green and colourful everything looks on a sunny day it almost makes up for the 200+ days of rain per year!

With some important must see attractions ticked off the list it was time to spend some time at my favourite haunts in town.  Namely the Harbour Bar and the Ramore Complex. You never quite feel like you’re properly at home until you’ve spend a few nights at the Harbour and Ramore and over the course of the summer D and I wined and dined here on average 4 nights a week!  That would explain my ever expanding waistline whilst at home but I wouldn’t have it any other way and now back in AD I have plenty of time to offset the damage! 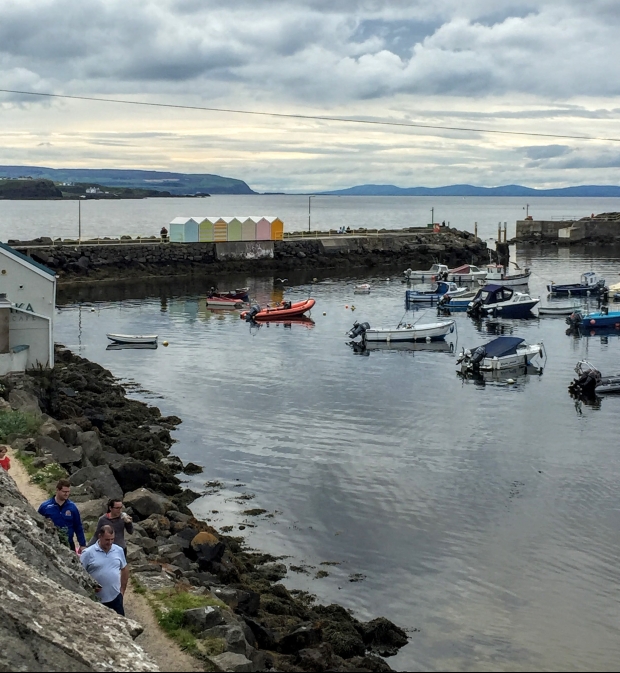 For anyone planning a trip to Northern Ireland, or a trip to the Giants Causeway, do yourself a favour and travel along the coastline until you reach Portrush and head straight for the Ramore Complex. The Ramore Complex consists of 5 different restaurants, a gin bar, a cocktail bar and most famous of all The Harbour Bar. 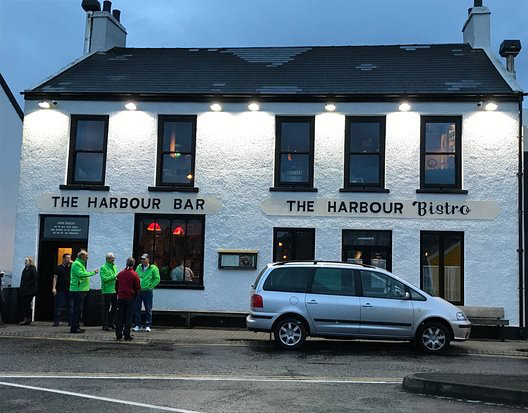 The Harbour bar overlooking Portrush Harbour is an absolute institution in Northern Ireland and is tended by the friendliest bar tender in the world, Mr Willie Gregg.  Not only is the ‘Harbour’ a great spot for a Pint of Guinness or a glass of ‘Bush but its also great for a bit of celeb spotting with regulars like Portrush’s own Darren Clarke, Graeme McDowell, James Nesbitt and Jimeoin!

While celeb spotting is great I have my own reasons for being a regular of the Harbour and that is more to do with the four legged frequenters of the bar!  The Harbour is one of very few dog friendly bars in NI and every single night, summer and winter, you will see regulars in tow with their humans! 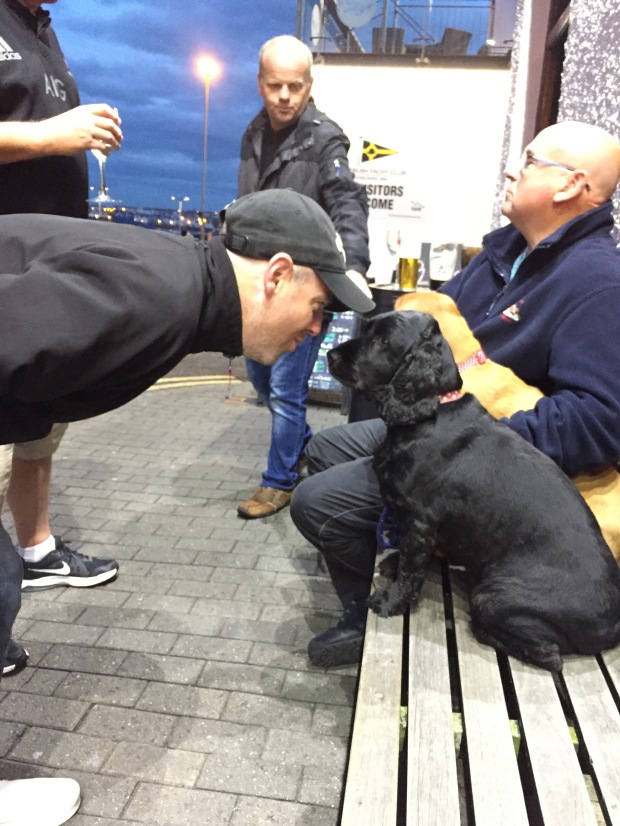 D up close and personal with a few regulars

I would find it very hard to give an honest answer about which of the five restaurants in the Ramore complex I prefer the most.  All have very different offerings and it would really depend on my mood or company.  Most homely and comforting would be either the Wine Bar or the Habour Bistro, if I wanted to make a night of it with some girl friends I would definitely say Neptune and Prawn with its Asian fushion menu and awesome cocktail bar.  If its a family affair with some older diners in tow it would have to be the Mermaid with its fresh seafood and spectacular view and ability to reserve a table.  And then if Im dining with kids or people with more basic food tastes the Coast is always a safe option.  Thats the wonderful thing about the Ramore complex, all tastes and ages are catered for and its all extremely reasonably priced.

Fish Pie from the Winebar

Portrush is not only famed for eating and drinking but for all the amazing golf courses too.  We were lucky enough to have an apartment at The Links for our time at home which sits on the 18th hole of Royal Portrush Golf Club and also overlooks Rathmore Club House. 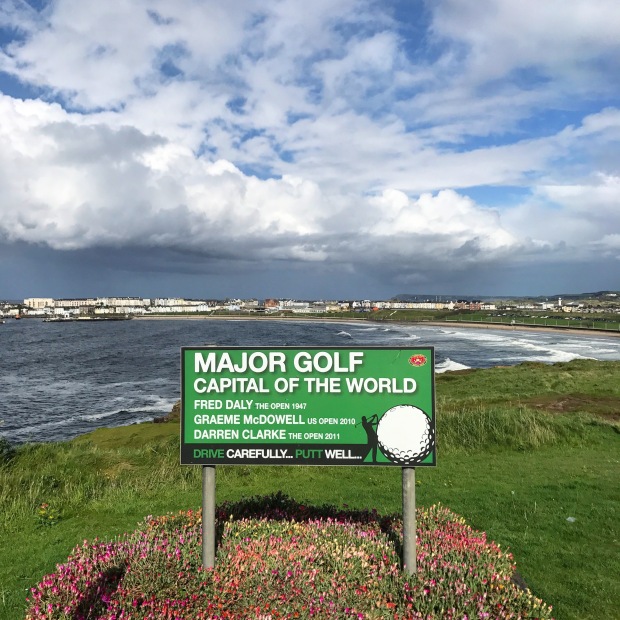 We were lucky enough to play Royal Portrush on one of the days we were at home (thanks to my Aunt!) but as I’m still very much a beginner the Old Course in Portstewart is more my level!  Golf in Abu Dhabi and Golf in Northern Ireland are very different experiences.

The biggest difference between golf in Ireland and golf in Abu Dhabi is the weather!  In Ireland you need a rain coat, umbrella, extra jumper, sun glasses, sun cream and a hat.  In Abu Dhabi you need as little clothing as possible! 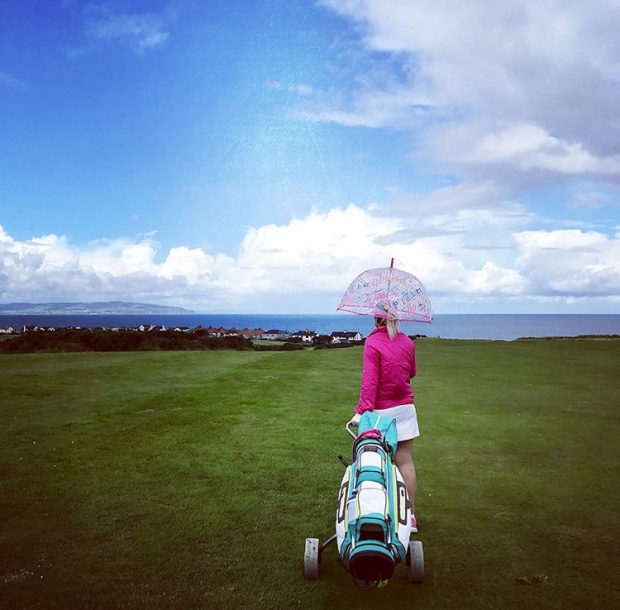 I will end Part 1 of our eight weeks in Ireland here otherwise I will talk forever about golf but keep an eye out for Part 2, I promise it won’t take as long to get up as this one did.  Part 2 will include our travels around Ireland with some American visitors and a few of my favourite places in Dublin.

2 thoughts on “Eight weeks in Ireland☘️”